Accept The Love I Think You Deserve 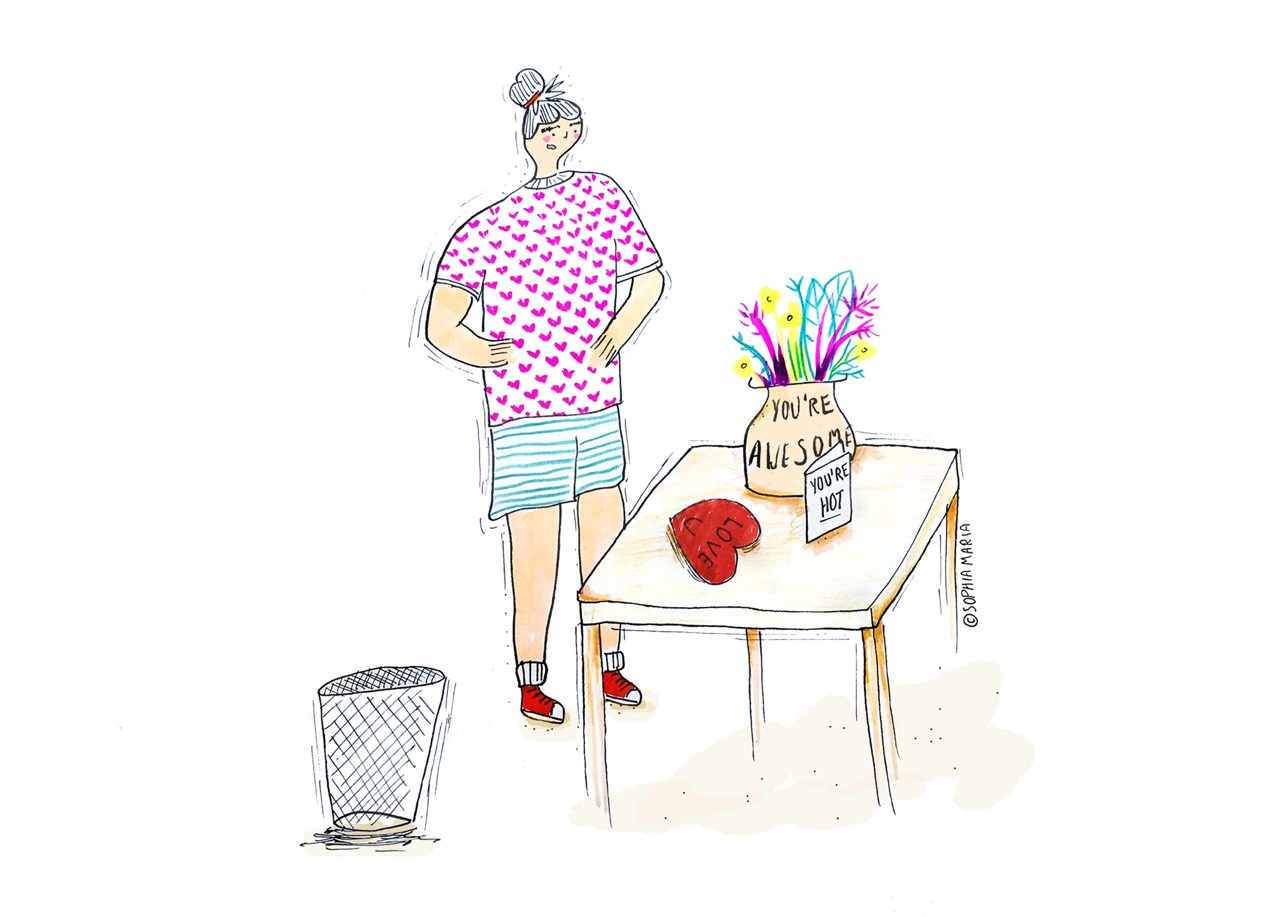 Can we please, just please, all learn to take a compliment?

a polite expression of praise or admiration.

Without claiming a faultless memory, I can’t recall the last time I threw an empty compliment someone’s way; in general, I’m not the most expressive with verbal affection. Like Dylan Moran, I believe that cake is the language of love. There’s value in showing someone you’re appreciative of their general existence, as opposed to proclaiming it verbally or through a cliche card written by someone who neither knows your best friend, nor thinks she’s the ‘greatest human on earth’. Jerry from the Hallmark office wasn’t there when she held your hair after you drank around eight too many Jägerbombs. He doesn’t understand.

But we live in a world where words are everything, and they’re everywhere. And some of them are complimentary, which is lovely because a lot of them, sadly, aren’t. Here’s the thing though; for all our gushing and praising, we’re astoundingly bad at taking a compliment. Sure, not everyone is. There are those who understand the definition of a compliment (see above) and realise its intention, accepting it and feeling good afterwards. But more and more I notice that I can’t compliment a friend without it spiralling downwards into complete denial. I don’t think I’m much better, to be honest. A casual ‘gee what a charming dress!’ is met with an awkward laugh, uncomfortable glance at your dress (despite the fact that you are fully aware of what it looks like: you bought it and chose to garnish your body in it earlier that same day) and then something along these lines:

“oh, this old thing? It looks like an absolute tent, I picked it up off the floor from a pile of dirty laundry because it was the only thing that didn’t smell like ass, my life is such a mess, I like your dress too!”

Cue grand hand gestures towards the other person to avert attention from yourself.

We live in a world that applauds self-depreciation as modesty, that paradoxically encourages kind words but resents the genuine acceptance of them. To not give a compliment where it’s due is bitchy; to agree with someone calling you beautiful is vain. But beauty is pervasive and most of us are cool, interesting people, deserving of understanding that about ourselves. What is actually wrong with loving yourself? The alternative is neutrality, sort of like saying ‘yeah I guess I’m okay’. There was a study by Dove a while back which showed that 96% of women rated themselves ‘average’ as opposed to ‘beautiful’. I don’t think that adds up; I certainly can’t think of one average woman among my friends. Maybe I have a uniquely wonderful group of buddies, but I suspect that most people would say the same about their friends. You do the maths. If someone tells you they think your hair looks wonderful today, or that you smashed it in your work presentation, it’s typically with the intention of making you feel good and is based on some truth. There is something about the current female mentality towards feeling good that prevents us from simply saying ‘thank you, I’m using a new shampoo and I feel like Beyonce’. If being vain equates to a healthy level of self-acceptance and love then be vain. Saying you’re good at something doesn’t make you a bad person: it probably just makes you an honest one. You’re allowed to be confident, whether it’s about how you look or work or merely the fact that you managed to match your socks this morning. Do you know how damn hard that is to do when it’s dark outside?

Putting yourself down at every opportunity isn’t modesty; it’s hateful. Unless you’re a generally hateful person, I see no reason why you would reserve that attitude exclusively for yourself. There is a fine line between being able to laugh at yourself, and being unable to applaud yourself. It perpetuates a culture where women aren’t allowed to accept that they’re attractive, smart or interesting. This instant refusal of compliments isn’t something I’ve noticed so obviously among my male friends (maybe because it’s less acceptable for men to seem insecure, but that’s a whole new issue). More and more we seem to value throwing our flaws all over the place above tempering it with celebrations of our achievements or statements of self-appreciation. For the most part, I don’t think anyone bats an eyelid when a guy jokes about his sexual prowess, or comments on how he smashed a project at work. So why do we think it will come across as arrogant if we do the same? We may not have ‘he’s just being a lad’ to fall back on, but when the compliments being given are based on genuine affection, why do we need anything to fall back on at all? No one should need an underlying reason to accept and admit their positive traits.

Yes, I can’t go one night out without knocking over at least two people’s drinks, but I have a really great tequila face. I can’t burp the alphabet but I can paint. I don’t have Gigi Hadid’s body but I pride myself on being able to eloquently argue about the fact that there isn’t one standard of beauty for women. People have told me these things, but to actually type them out? To admit that I am not the human incarnation of all the worst parts in Bridget Jones’ diary? It’s uncomfortable, and it shouldn’t be. Not for anyone.

Next time someone gives you a compliment, high five them and say ‘thank you’. More importantly? Use the compliment to build your self confidence, not to create a joke out of something you’re proud of.

DO I HAVE TO EXIST ONLINE TO BE SUCCESSFUL?

Five Books To Read During Lockdown

It may seem trite two months into lockdown to comment on the strange and uncertain times we are living in. We’ve become…

Self Care for Self-Isolation

For all of us, the outbreak of covid-19 is a period of unprecedented change, chaos and confusion. Facing the anxieties of watching…

Are We More Vulnerable to Stalking Than Ever?

The father of Molly Russell who tragically took her life at age 14, has appeared on multiple news networks arguing social media…

Taking Your Wounds into The Wilderness

The walk into the valley took about four hours. We carried packs the size of ourselves, stocked with too much food and…

Period Pain: Saying ‘No’ to Normal

Day to day, most of us put up with small health worries without paying them much attention. Whether it’s getting an intermittent…

Watching The News in the Ladies Changing Room

I don’t really know why I pay for a gym membership. My workout routine consists of a 20-minute cycle while I watch…

To Do: Be Unproductive

I can’t pinpoint exactly when the change happened: when a ‘good day’ came to be measured by productivity levels instead of some…